The UK side of things

Game Informer posted a gallery of Halo 4 art last night, I thought I'd go one better and do a gallery of all the Halo 4 concept art released so far. I'll include some quotes from the GI article along with thoughts of my own.

This piece shows the loneliness of the Chief, dwarfed by the massive Forerunner stalactites. Imagery like this suggests we may have some more serene exploration sections in between combat. I think that will give the game a very different feel to certain other shooters and is a brave move by 343i. 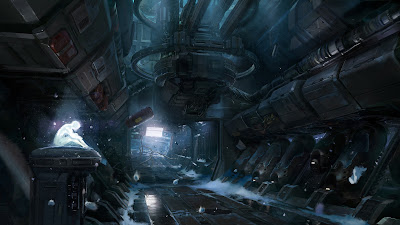 John-117 and Cortana have been floating through space aboard the UNSC Forward Unto Dawn for four years, seven months, and ten days. Cortana's curled up form speaks to her distress, which will play strongly into some of the events of the game. As Halo 4 begins, Cortana will be facing her own imminent madness and death; as a smart AI, her seven year lifespan will create serious challenges to the unshakeable partnership between the two characters.

Cortana has had a more vulnerable look in pretty much all the art we've seen of her, this is in stark contrast to the powerful, imagery that accompanied Halo 3. It's a big change for her character, but I expect this shift will be important to the tone of Halo 4.

The glowing blue light further back reveals the opening into the vast Forerunner artificial world called Requiem. Events will conspire to send the Forward Unto Dawn through that gateway and down to the planet beyond the outer shell.

I think it's worth noting that the Banshees look very much like traditional Covenant Banshees, it has been suggested that the Covenant we encounter at the start of Halo 4 could be pirates or rebels. In Halo 2 the rebels led by Sesa Refumee had gold Banshees. I think if these were pirates or separatists then 343i may have emphasised that by changing the aesthetics of their ships. I could be reading too much into it, there's other explanations. I just thought it was worth raising the point. 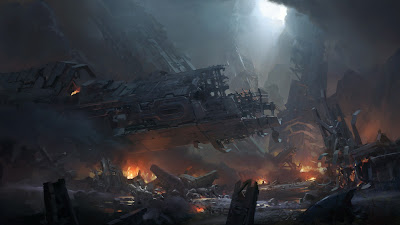 I'm not entirely sure what we're seeing in this image, it could be the crashsite of the Forward Unto Dawn, but the image appears to depict several 'spokes' moving out from the main crash site which doesn't match up with  the architecture of the Dawn. It could be something that the Dawn has crashed into, I guess. 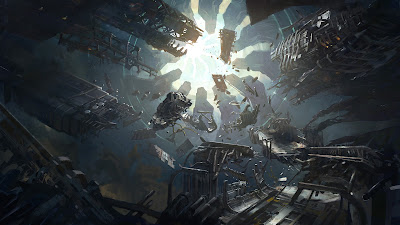 I'd guess that this piece occurs moments before the image of the crashsite above and shows chunks of the Forward Unto Dawn falling through the portal on to Requiem. 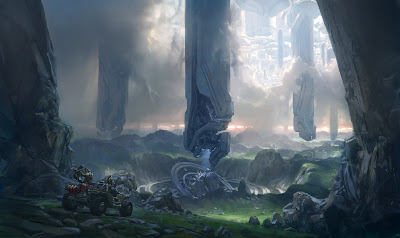 One of the central locations depicted in Halo 4, Requiem is an ancient artificial world created by the mysterious Forerunner civilization millennia ago. A big part of Halo 4 will involve exploring its many secrets. Take a closer look at the art, and you can see that the pillar-like objects are actually hanging from above. That's because Requiem is surrounded by a huge outer shell, and numerous stalactite-like objects hang down from the interior of the ceiling.

This image clearly shows marines, or at least humans, in the Warthog on Requiem. We can't really confirm whether Chief is with them, but I take this to mean that we'll be meeting up with our UNSC buddies on Requiem at some point. 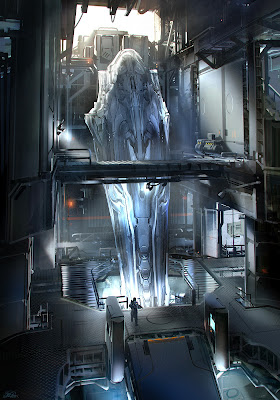 This Forerunner artifact image comes with few details from 343 Industries, but it's not hard to make some guesses. At first glance, the artifact's shape calls to mind an ancient sarcophagus, or storage chamber. Could this be the resting place of a dead Forerunner, or even its ancient cryo chamber? Or does this Forerunner artifact have another purpose? 343 isn't telling, but the developers have hinted that this image relates to the multiplayer storyline.

We know from Glasslands that the Infinity was built to make use of Forerunner technology discovered on Onyx/Trevelyan. This could be anything, a weapon, a slipspace drive, a fighter craft even. I can see where GI are coming from with their suggestions it looks like a sarcophagus, but I'm not sure why the UNSC would mount a Forerunner sarcophagus inside one of their ships like this. 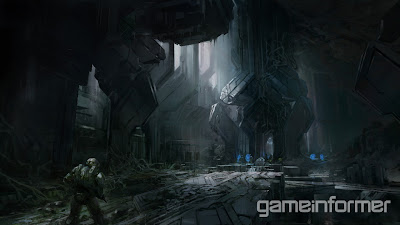 The Forerunner structures on Requiem may be ancient and at times overgrown, but 343 promises that we'll also see these facilities more active and alive than Forerunner ruins in previous games. While it's unclear who the new enemies will be on the planet, it's obvious by the familiar handheld shields in this image that the Covenant are also present on the mysterious world. 343 has suggested that we'll see interesting interactions between the Covenant and the new enemy force. Something tells us the new bad guys aren't going to like the Coveanant being on Requiem any more than they like Master Chief being there.

Requiem is a special variation on a Forerunner Shield World. Among other things, the Shield Worlds were constructed by the Forerunners as places that would remain safe from the Halo pulse that wiped out all sentient life in the galaxy. Have Forerunners survived all these centuries? Or does something else live here now?

This image appears to show Chief exploring the wreckage of the Forward Unto Dawn and is another piece demonstrating the scale of Halo 4 environments. Interestingly this does not look like the same crashsite we saw earlier, there's no fire and the ship seems to be in fairly good condition. Maybe the crashsite depicted above is something else... 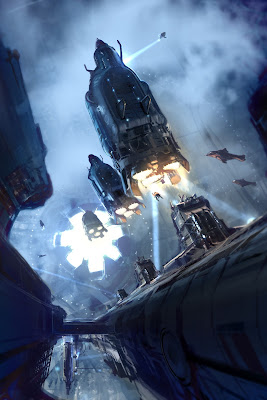 There's not a lot of details about this image, but I believe we're seeing the UNSC Infinity arriving at Requiem. It can't be the Forward Unto Dawn because there's clearly a lot more activity that just the Chief and Cortana could be responsible for with three dropships/pods and two Pelicans all visible.
Thanks to Flawless Cowboy at The Little English Halo Blog for the UK ideas
Posted by DEADSHOT at 7:03 AM

Search This Blog For HALO 4 Info

DEADSHOT
I love Halo and I am so happy Halo 4 is out! Twitter: @DEADSHOTx117 Gamertag: xDEADSH0Tx13